Performing at the Baryshnikov Arts Center was Magical.

Last week I did a show with my dad, Stanley Jordan, at the Baryshnikov Arts Center in midtown, New York City. I had to leave the kids at home with Ali because it was a school night and Cienna has missed enough school already this year. As much as we like to do everything as a family, performing is work and I had to be away for a night before driving home in a blizzard the next day (!). I did get a night to sleep diagonal across a hotel bed all by myself, though. That was pretty nice…

But back to BAC, if you’ve never been there before please, for your own sake, make it a point to see a performance sometime. It’s worth it. They have an amazing sound system, helpful and knowledgeable staff, and a receptive, enthusiastic audience. What a concept… playing at a venue where people are there to, get this, LISTEN to the music!

The space is on the 3rd floor of a nondescript building in midtown, but as soon as you walk in, you get little goosebumps because you just know that something magical will take place in front of you.

I may a little biased because, honestly, I feel like my dad and I make our own magic whenever we play together. So I’m sure there is a little of that bias in my description of this place. But I also think that the magic he and I brewed was only accentuated by the magic of the space itself.

The show was hosted by the Jazz Foundation of America. After the performance there was a reception with champagne, cheese/crackers, fruit and cupcakes. Not just any cupcakes, oh no. They had the cupcakes with the good frosting. You know the kind. I’m talking about the frosting that gets all over your mouth and hands and makes you talk like you have peanut butter on your tongue. Yeah, those cupcakes.

So there we were, dressed to the nines; eating messy, mushy, perfect chocolate cupcakes. And I wouldn’t have had it any other way.

Mikhail Baryshnikov was in attendance at the show and brought his daughter Anna. They were both lovely and warm and welcoming people. In fact, we all chatted for a while before I realized just who I was talking to! Wish I had realized just a bit earlier in our conversation, but at least we got this father/daughter photo! 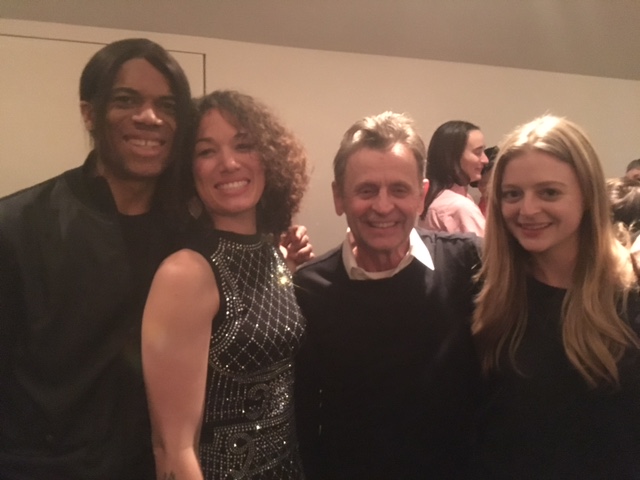 I can’t thank BAC NYC enough for such a wonderful night. I look forward to doing something there in the future. And thanks to the Jazz Foundation for putting together such a magical show in such a magical space.